My travel bike is a Swiss made Villiger touring bike, which has been painted in the factory in the colours of the shop where I bought it in September 2000, Jean Brun Cycles – a historical local shop in Geneva, where the profession is being transmitted from father to son. 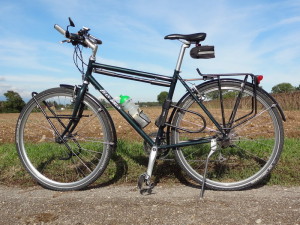 It is a strong and technically simple bike, fully adapted to travelling in Europe, both on surfaced and unsurfaced roads : in 18 years, I never had any serious problem.

Schwalbe Marathon Mondial tyres are the follow-up of Marathon XR which I had been using before. These tyres are really puncture-proof : in over ten years, I cannot remember more than two flat tyres, and they will resist well over 10’000 km. The best choice for bike travellers !

I added bar ends to my handlebar, so as to allow different positions while riding. I find them particularly useful in climbs and in hot weather, as aluminium doesn’t get as warm and sticky as my plastic handlebar grips.

As there wasn’t enough space on my handlebar for a second counter and the front light, I fixed a “space bar” on the right side. Now, the light beam can get over my handlebar pannier and be visible for coming traffic. 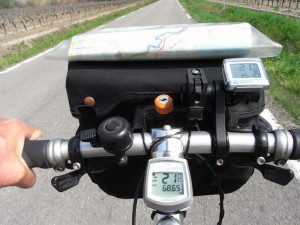 For security reasons, I’ve put up a mirror on the left side of my handlebar, as well as a bell. My preferred mirror is a Cycle Star 901, from Busch & Müller : easy to install and adjust, stable even on a rough track and offering a broad clear view to the rear. When there’s traffic, I think that I look as much in the mirror as the road in front of me.

Regarding lights, I’ve got a battery rear light fixed to the carrier, as well as a removable battery headlight. In case of fog, I add the very efficient flashing LED Knog Frog lights.

The bike frame includes eyelets, both on the fork and at the rear. I’m using the great TUBUS carriers, which in Switzerland can be found at Veloplus, as well as in many other local shops : 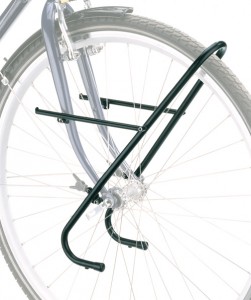 These carriers are extremely strong and long-lasting. They allow to safely fix heavy loaded panniers. The luggage load should be balanced between rear and front panniers, so as to ensure a good road holding, particularly when riding fast in descents. 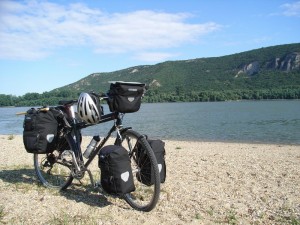 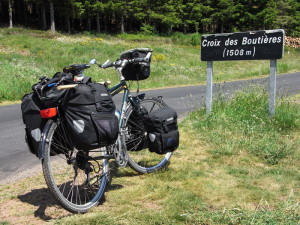 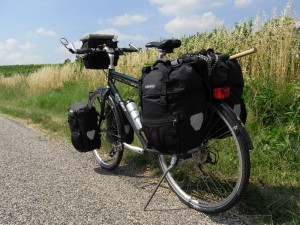 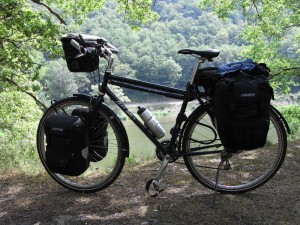 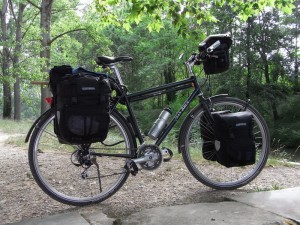