For a map view of my bicycle day tours around the Geneva region, please follow this link. The routes are hereunder classified by alphabetical order.

Around Geneva basin (west part) ; for MTB. A long anti-clockwise day tour riding at the foot of the mountains surrounding Geneva basin : Mt Jura, Mt Vuache and Mt Salève. The northern section is the same as in Mandement & Jura foot route (see below). After Collonges, we cross the Rhone on Pont Carnot and enjoy a nice view over the Défilé de l’Écluse. At Vulbens, the road climbs to Murcier, where we leave the asphalt for a rocky track leading us to Vigny. The rest of the route is surfaced, except a short stretch on the second part of Mt Sion. Distance : 92 km / Climb : +1150 m / Highest altitude : 810 m / Average slope (climb) : 6% 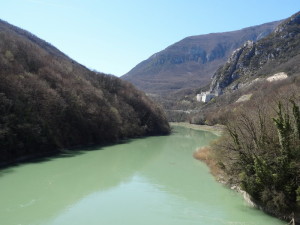 Around Mt Vuache ; for trekking and mountain bikes. This is more or less the same itinerary as Ridge route 2 (see below), except that we don’t climb on Mt Vuache, but instead drive around it. From Chaumont, the road climbs and is surfaced as far as Vovray. Then an easy forest track follows the foot of the mountain until Arcine – definitely muddy after rain ! The southwestern side of Mt Vuache benefits from a very mild climate, hence it houses some Mediterranean insect and plant species. Information boards can be found here and there around the mountain. 88 km / +1100 m / highest 895 m / average 6% 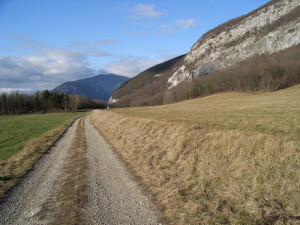 Crêt de la Neuve – Marchairuz – Mt Tendre ; for MTB. Starting in Coppet, we climb on Mt Jura via the easy and quiet Bassins-Combe des Amburnex road. This climb is a signposted official section SwitzerlandMobility network. Shortly after reaching the beautiful Combe des Amburnex, we leave the road to the right to follow forest tracks and single trails all the way to Mt Tendre, which is the highest swiss summit of Mt Jura (altitude : 1679 m ASL). Please, note that some sections require to push the bike (a few km in total), because of steep climbs as well as stones and roots on the trail. Besides, there will be large ponds and muddy ground here and there after one or two rainy days. 85 km / +1850 m / highest 1679 m / average 8% 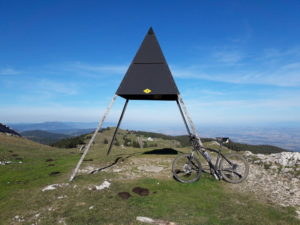 Gex – Berolle – Nyon ; for road and trekking bikes. Long day tour along the foot of Mt Jura, across the Pays de Gex (France) and the canton de Vaud (Switzerland), before turning back towards Nyon, where we can catch a train to Geneva. From Gingins to Berolle, we follow a signposted cycle Route (Suisse à vélo 50), and we do so too from Aubonne to Nyon (Suisse à vélo 63, then 1). Secondary roads and country lanes. 106 km / +1200 m / highest 900 m / average 5% 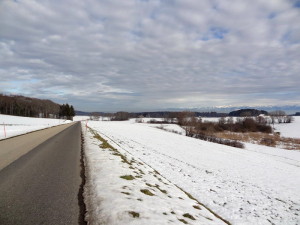 Mandement & Jura foot ; for road and trekking bikes. Nice and easy tour in the western part of Geneva basin, through vineyards, the Allondon small valley and one of the most beautiful countryside roads of the whole region (route de Goisin), starting in St-Jean-de-Gonville. Driving down to the Rhone river at Chancy (westernmost village of Switzerland) gives a good preview of the relatively large Chancy-Pougny woods. This tour can easily be cycled in winter too, as it remains in the plain. 62 km / +620 m / highest 580 m / average 5% 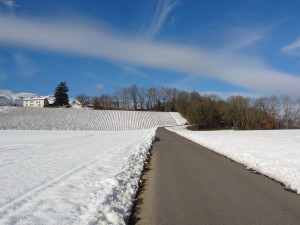 St-Jean-de-Gonville – Gingins – Divonne ; for road and trekking bikes. Another nice ride into Pays de Gex and Canton de Vaud, along the foot of Mt Jura, on cool secondary roads and country lanes. On the way back we pass by Divonne’s lake and then follow the same itinerary as Ridge Route 5 above. 95 km / +750 m / highest 680 m / average 5% 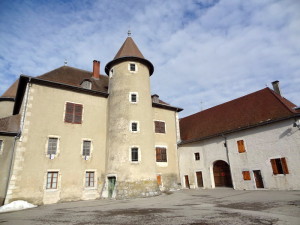 The Kill Monsanto Tour ; for road and trekking bikes. This is my ride to go to the yearly demonstration against bloody Mon$anto in Morges. Mostly quiet secondary roads, plus a few unpaved rural tracks that can easily be avoided if you ride a road bike. Easy return by train if the one-way ride is enough. Come with your friends in May – check the date on the web ! 140 km / +1070 m / highest 810 m / average 5% 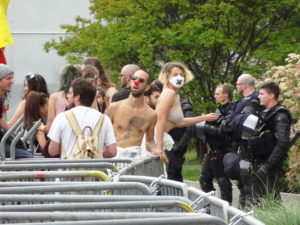